No, listen, that’s not gibberish. I was recently in Napa and while I was there, not only did I learn how they make sparkling wine using the same method as those in Champagne, France but I also learned about how it’s important to not water grapes. It may not be true for all vineyards, but it was true for one small plot because there was a natural water source close by. They said that not watering the grapes made them work harder, grow deeper roots, and the flavor becomes more “robust”. Fancy.

I thought it was such a great metaphor for parenthood. As parents, you want to protect your kid from anything you can. Advocating for your child does not mean making things easier for them. In fact, making things easier too often actually puts them at a disadvantage. There is a healthy degree of stress. Too little and kids struggle to build resiliency. They’re less successful, less driven, more fearful of failure, which means they’re less likely to really try beyond what they believe themselves to be capable of. Too much stress equates to trauma, which undermines their ability to regulate the fear response, which makes everything harder and ultimately holds them back from really thriving. There’s a happy medium for stress.

So–let your kids struggle. Let them work hard, grow deeper roots, and become dynamic, capable people full of depth and complexity. Doing it for them or rescuing them from difficulty isn’t actually helping them. Quit watering their grapes. You gave them the foundation, so go pour yourself a glass of wine and let them see what they’re capable of.

Being Grateful in the Chaos

Sublimation: Is it a Cognitive Distortion, or an Adaptable Strength? 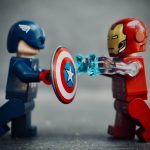 Defense Mechanisms: An Introduction to When/Why We Use Them